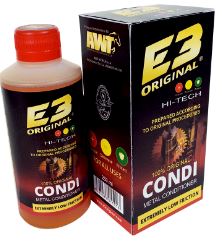 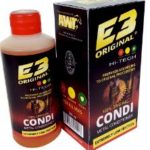 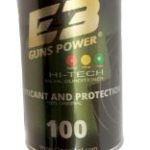 Metal conditioner is the general name for a liquid that refines metal surfaces and was developed for extremely high thermal and mechanical loads, advanced by HI-TECHnology in NASA, aerospace, heavy industry and auto-moto sports. Metal Conditioner also had its premiere in the world of Formula and GP.

Metal Conditioner E3 Original, a product that has entered the 5th generation has the designation MCE3 EXTREM (hereinafter MCE3) is a HI-TECH product, which is an unconventional additive to operating fluids, where it creates a nanotechnologically highly resistant and high temperature resistant layer on the metal surface. and excessive mechanical load.

MCE3 is a 100% synthetic liquid that does not contain any solid particles, such as additives based on Teflon, PTFE, copper or lead molecules, etc.… For this reason, there is no risk of clogging of filters and oil lubrication channels, nor are there any heat dissipation problems . It is a means for refining metals of the best quality, which does not change the plastic properties of metals, acting on the basis of synthetic hydrocarbon derivatives, protecting metals by a permanent synthetic molecular bond containing a corrosion inhibitor. It is characterized by high molecular weight, high chemical and thermal stability, is not included in the group of hazardous substances, does not contain any harmful components or solvents with low molecular stability, reduces / reduces the oxidizing ability of metals. MCE3 binds molecularly to the protected friction surface, where it forms a macromolecular protective layer on all rotating and friction walls. Mixed with the operating fluid, it creates a permanent and durable macromolecular lubricating layer with high strength and slip resistance, resistant to high temperature and considerable mechanical load, prevents dry friction (cold starts). Due to the circulation of operating fluids, it reaches the sliding and friction surfaces, where it immediately forms a micromolecular inner protective structure and outer protective film. MCE3 acts immediately after its application, acting directly on the metal at the molecular level. MCE3 is not an oil or additive, but a liquid additive to operating fluids, which is technically called a metal surface conditioner.

The price of transport varies depending on the weight of the goods and the value of the order. The price for transport will be recalculated and sent in the invoice.

You've just added this product to the cart: